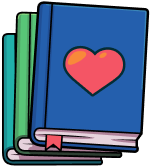 When we think about cheetahs, the idea of these wild cats forming friendships with dogs seems extremely unlikely. But cheetahs can become anxious, particularly when interacting with humans in a zoo environment. The San Diego Zoo solved this problem by introducing one of their cheetah cubs, Arusha, to a Golden Retriever named Anna, and the animals became best friends. Arusha and Anna became animal ambassadors, meeting thousands of visitors at the San Diego Zoo, and other cheetah/dog friendships soon followed. Here are some great books about cheetahs, dogs, and other unusual animal friendships: Read More

In celebration of National Zoo and Aquarium Month, here are some of Jazzy’s favorite books about animals living in zoos and aquariums. Read More

The average car releases almost a pound of carbon dioxide into the air every mile it’s driven. If you drove 365 fewer miles per year, that would be equivalent to planting four trees and having them absorb CO2 for ten years. Want to learn more about protecting our environment? Check out some of these great books! Read More

Join the Principals’ Clubhouse! Join our monthly virtual meetings and learn to lead literacy like never before! Engage in peer-led professional development around topics that will help you innovate in your school and engage your community. Clubhouse Perks: Connect with principal-colleagues and leaders in the field on the first Thursday… Read More