In this Caldecott Honor-winning picture book, The Twilight Zone comes to the carrot patch as a rabbit fears his favorite treats are out to get him.

He eats them on the way to school.

He eats them going to Little League.

He eats them walking home.

Until the day the carrots start following him...or are they?

Celebrated artist Peter Brown's stylish illustrations pair perfectly with Aaron Reynold's text in this hilarious picture book that shows it's all fun and games...until you get too greedy. 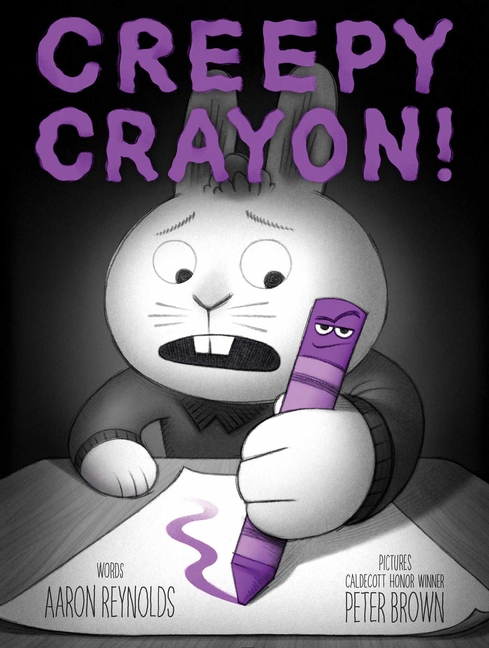 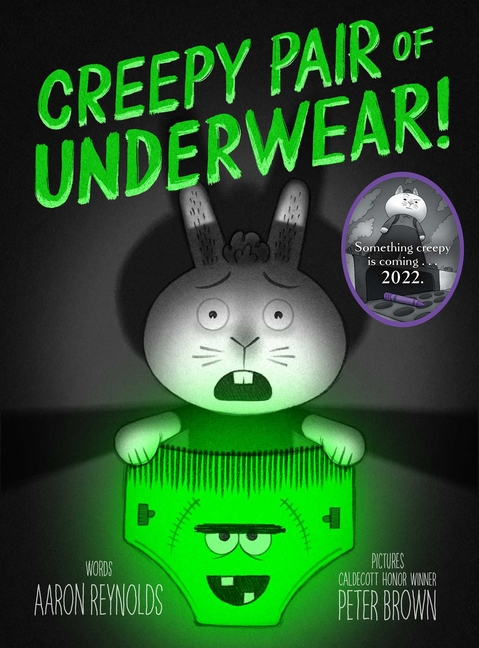 Serve this superbly designed title to all who relish slightly scary stories.
Brown’s charcoally black artwork is highlighted by deep oranges and delivers on the lighthearted thrills of Reynolds’ fright-night story.

In a spot-on parody of a paranoid thriller, a hungry bunny senses "creepy carrots" watching his every move. Jasper Rabbit doesn't think twice about plundering the carrots of Crackenhopper Field "until they started following him." Jasper glimpses three jack-o-lantern-jawed carrots behind him in the bathroom mirror (when he turns around it's just a washcloth, shampoo bottle, and rubber duck--or is it?), and he yells for his parents when a carrot shadow looms on his bedroom wall. Reynolds (Snowbots) makes liberal use of ellipses for suspense, conjuring the "soft... sinister... tunktunktunk of carrots creeping." Brown (Children Make Terrible Pets) illustrates in noirish grayscale with squash-orange highlights and dramatic lighting, framing each panel in shiny black for a claustrophobic film-still effect that cements the story's horror movie feel. Jasper's grin grows maniacal as he constructs a fortress and moat to contain the offending carrot patch, giving the carrots a happy ending in this Hitchcock spoof (Brown even sneaks in a sly Vertigo reference). Watch out, vegetarians--these carrots have bite! Ages 4-8. Agent: Paul Rodeen, Rodeen Literary Management. (Aug.)

Jasper Rabbit's craving for carrots is insatiable. He raids Crackenhopper Field several times a day, and his manner shows no regard for the vegetables' feelings. He "pulled," "yanked," and "ripped" them out before greedily gorging. Everything changes when he senses that he is being followed. Carrots seem to be "creeping" up on him everywhere he goes. Jasper's eyes play tricks on him (or do they?), as he sees the veggies' menacing reflections in the bathroom mirror, silhouettes on the bedroom wall, shapes on the shelves in the shed. Brown's panels-bordered in black, drawn in pencil, and digitally composed and colored-cleverly combine the mood of film noir with the low-tech look of early children's television staging for an aesthetic that is atmospheric, but not overwhelming. The scenes are rendered in black, white, and gray-except for the carrots and the objects that stand in for them when Jasper does his double takes: these are all orange. Panels in varying sizes and multiple perspectives keep pace with Reynolds's tongue-in-cheek narrative as Jasper solves his problem by building a fortress, complete with an alligator-filled moat, around the offending plants. Little does he know that the carrots are cheering on the other side of the fence at the success of their plan to keep the herbivore out. This age-appropriate horror story takes children's fears seriously and then offers them an escape through genuine comic relief. Contrast this with the equally hilarious moat and bunnies in Candace Fleming's Muncha! Muncha! Muncha! (Atheneum, 2002).—Wendy Lukehart, Washington DC Public Library