Now in her Second Year at Pearl Famous Academy of Skate and Sword, Peasprout Chen strives to reclaim her place as a champion of wu liu, the sport of martial arts figure skating. But, with the new year comes new competition, and Peasprout's dreams are thwarted by an impressive transfer student. Yinmei is the heir to the Shinian throne and has fled her country for Pearl. When she excels both academically and socially, Peasprout begins to suspect that Yinmei is not a refugee at all but a spy. When the Empress of Shin threatens to invade the city of Pearl, Peasprout makes a bold decision. To keep her enemy close, Peasprout joins Yinmei's "battleband, a team that executes elaborate skating configurations that are part musical spectacle, part defensive attack.

In Henry Lien's Peasprout Chen: Battle of Champions, Peasprout guides her battleband on a mission to save Pearl, and learns what it truly means to be a leader. 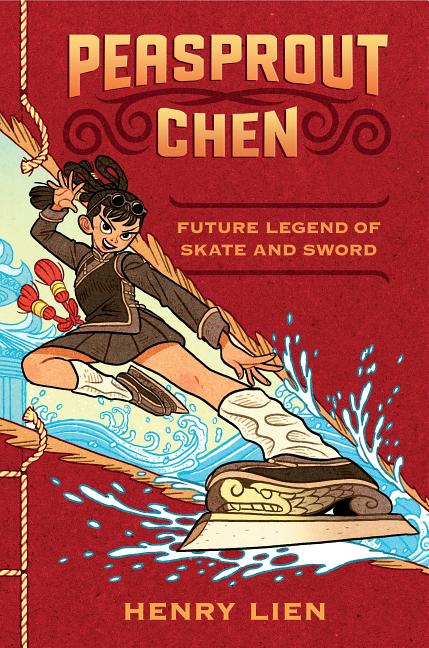 An exciting adventure that highlights themes of teamwork and leadership.
Features the sprightly physics-defying skate flips and jumps found in the previous volume, along with creative new applications of science and music that add even more rocket-fueled energy... [Fans] will enjoy watching the protagonist's leadership style develop as she wrestles with trust, kindness, and her responsibilities to her battleband and to Pearl itself.
Praise for Henry Lien's PEASPROUT CHEN, FUTURE LEGEND OF SKATE AND SWORD: "It's Hermione Granger meets 'Crouching Tiger, Hidden Dragon' meets the Ice Capades meets 'Mean Girls.'" For all its disparate ingredients, though, PEASPROUT CHEN: FUTURE LEGEND OF SKATE AND SWORD speaks in a single, strong voice, thanks to its spirited heroine. —The New York Times Takes on weighty and relevant questions of gender, ability, leadership, immigration... with intelligence, deftness and precision. —Kirkus, Starred Review Massively entertaining...Peasprout Chen is a future legend, indeed. —Publishers Weekly, Starred Review For a rewarding and well-constructed plot in an uncommon setting—plus some effective genderqueer subversion at the end—this story can't be beat. —The Horn Book An utter delight from start to finish... I love this book! —New York Times-bestselling author Jonathan Auxier Peasprout Chen is my new favorite heroine of young people's literature. —New York Times-bestselling author Daniel José Older Thrilling, beautiful, fierce, and like nothing I've ever read before.—Mike Jung, author of Unidentified Suburban Object

The fictional wu liu that flourishes there—acrobatic fighting conducted on springy ice skates—stands a good chance of elbowing aside quidditch as the next big novel-inspired sport... luring fans of martial arts, well-built worlds, and romance back for ensuing adventure.—Bulletin of the Center for Children's Books Lien's exciting debut is a story of acceptance and bravery, friendship and hope. Peasprout dreams of becoming the best in wu liu, a mix of martial arts and figure skating...A riveting and complex read about new beginnings, family, and choices. —Booklist