In the second book in the series, Kingston and his friends must find a way to travel through the Realm to save their world from destruction.

Kingston might have saved Echo City but the victory is bittersweet without his pops by his side. The holidays are approaching and if Kingston could have one wish, it would be to have his father, who is trapped in the Realm, come home. But as new problems arise and blackouts blanket the city, Kingston begins to have a persistent feeling of déjà vu, as if he's lived this same day before--and he has. Echo City living up to its name, is caught in a repeating time loop.

Maestro, his father's old rival, has found a way to overwrite reality with an alternate timeline where he rules over all. It will be up to Kingston, Too Tall, and V to find a way to enter the Realm and travel back through time to stop Maestro and save Brooklyn before it's erased for good. 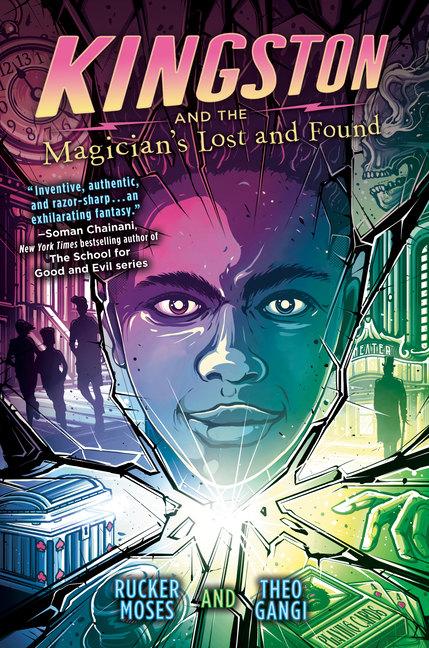 Readers who enjoyed Kingston and the Magician’s Lost and Found (2021) will welcome this brisk sequel that maintains the engaging tone of the first series entry and entertainingly incorporates information about ancient Egyptian gods. An illuminating sequel.

Rucker Moses
Rucker Moses is the pen name of Craig S. Phillips and Harold Hayes Jr. They both hail from Atlanta and started telling stories together at the University of Georgia. Together, they've been nominated for three Emmys for writing in a children's program and have written for TV shows based on books by R. L. Stine and Christopher Pike. They also make virtual reality experiences and own a production company named SunnyBoy Entertainment. In no particular order, their favorite things to write about are ninjas, magic, space, and abandoned amusement parks. When not doing all that, they are hanging with their wonderful families at home in Los Angeles. Theo Gangi is a novelist and writing teacher based in Brooklyn. He's written several acclaimed novels and short stories, and he's worked on shows for Netflix. He writes far-out adventures that happen right next door. He directs the MFA program at St. Francis College and lives with his wife, young son, and their dog.
Classification
Fiction
ISBN-13
9780525516897
Lexile Measure
N/A
Guided Reading Level
N/A
Publisher
G.P. Putnam's Sons Books for Young Readers
Publication date
October 20, 2021
Series
Kingston
BISAC categories
JUV037000 - Juvenile Fiction | Fantasy & Magic
JUV001000 - Juvenile Fiction | Action & Adventure
JUV013060 - Juvenile Fiction | Family | Parents
Library of Congress categories
Time travel
African Americans
Magic
Family life
Brooklyn (New York, N.Y.)
Magicians
Reality

Kingston and the Echoes of Magic (Kingston #2)