When Stick rescues Stone from a prickly situation with a Pinecone, the pair becomes fast friends. But when Stick gets stuck, can Stone return the favor?

Author Beth Ferry makes a memorable debut with a warm, rhyming text that includes a subtle anti-bullying message even the youngest reader will understand. New York Times bestselling illustrator Tom Lichtenheld imbues Stick and Stone with energy, emotion, and personality to spare. In this funny story about kindness and friendship, Stick and Stone join George and Martha, Frog and Toad, and Elephant and Piggie, as some of the best friend duos in children's literature. 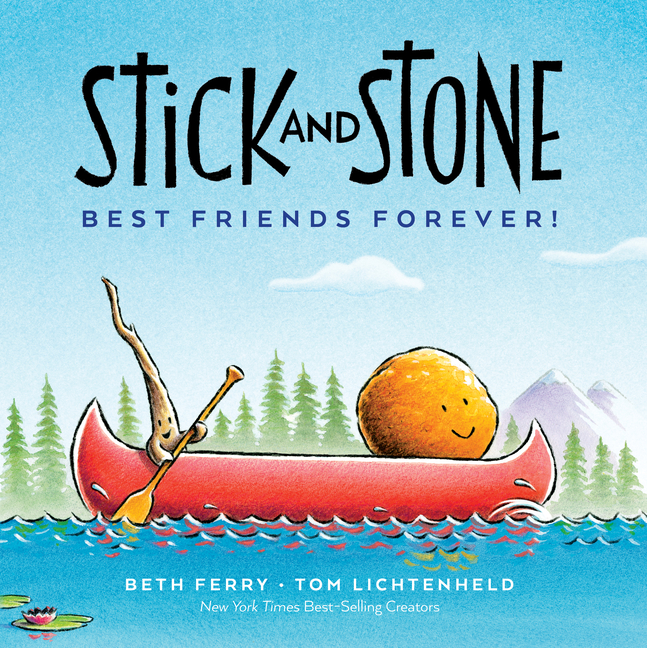 These two characters are a delight to know...and the irresistible cadence of the text should make this a repeat favorite.

A light, enjoyable approach to a recognizable narrative about making—and helping—friends.

Preschoolers looking for a model of good friendship need look no further. Kindness rules the day, and humor, rather than obvious lesson-teaching, moves the story along.

PreS-Gr 1--This stick and stone would never break a bone, as they're too busy caring about each other. Round stone labels himself a "zero" and tall, skinny Stick is only a "one," as they are solitary figures until they come together to form "a perfect 10." Stick sticks up for Stone when bully Pinecone makes fun of the rock, and the two become close companions. Told in rhyming couplets, this warm and tender story of two BFFs is made even more enjoyable by the charming, textured tan and blue illustrations, highlighted with touches of green and red. The pictures range in size from double spreads to small vignettes and deftly convey the two companions' harmonious relationship. Endpapers reveal Stick's and Stone's origins, and the text, suitable for beginning readers, sweetly expresses what it is to be and to have a good friend.--Maryann H. Owen, Children's Literature Specialist, Mt. Pleasant, WI

Newcomer Ferry's simple rhymes and Lichtenheld's (Goodnight, Goodnight Construction Site) pared-down art make fine partners in this testament to friendship. At the outset, reedy Stick stands moodily by the sea, while round Stone gazes at the moon ("Stick. Stone./ Lonely. Alone"). They meet at the playground, where a pinecone makes fun of Stone. Stick defends Stone (" 'Vanish!' says Stick./ His word does the trick"), and a friendship is born. Ferry adds zip to the best-friends-forever theme with plenty of sly puns ("Stone whispers, 'Gee, / you stuck up for me!' "), and Lichtenheld conveys significant expressiveness through the characters' dot eyes and small smiles. More subtly, he darkens objects when the story takes a discouraging turn and pours on the sunlight when things cheer up. Friends can help each other by capitalizing on their differences, he suggests, as when Stone rolls a path through tall grass for Stick as they travel. The use of instantly recognizable objects as characters gives the story universal appeal, and Ferry makes its moral unmissable. Ages 4-8. Author's agent: Elena Giovinazzo, Pippin Properties. Illustrator's agent: Amy Rennert, Amy Rennert Agency. (Apr.)