This silly and quirky kitchen escape about a rebellious pea's trip down the drain shows what can happen when you take your eyes off your food--perfect for fans of Sue Hendra, Paul Linnet, and Jory John!

The Runaway Pea is off the plate again...and this time he's bounced right down the drain! It's cold and dark, but he's not the type who gets grum-pea. Instead, the Runaway Pea is having an amazing time splashing and sliding toward the sewer and making new acquaintances along the way! But are Duck, Fish, and Frog looking for a new friend? Or for a little green snack? 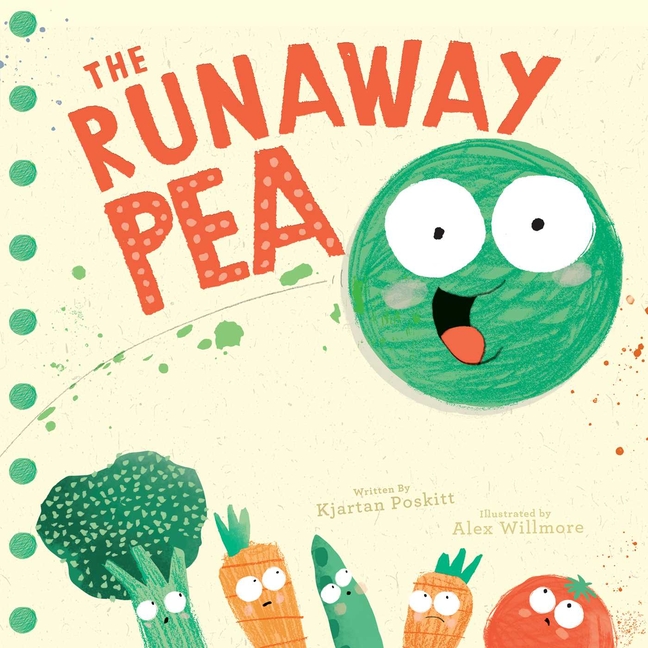 Kjartan Poskitt
Kjartan Poskitt's books have been translated into thirty languages and include the Murderous Maths series, as well as books on space, puzzles, and magic. He has also written funny children's fiction including Urgum the Axeman, Borgon the Axeboy and the Whispering Temple, the award-winning Agatha Parrot series, and The Runaway Pea. Alex Willmore is an illustrator/designer whose passion lies in character design. Born in Northampton, England, Alex has been drawing characters since the moment he first picked up a pencil. A love of animals and picture books have inspired him and led to a career in illustration. Alex has been twice nominated for the Sheffield Children's Book Award, was long-listed for the Kate Greenaway Medal 2020, and is currently nominated for The Federation of Children's Book Groups Children's Book Award 2020.
Classification
Fiction
ISBN-13
9781534490161
Lexile Measure
N/A
Guided Reading Level
N/A
Publisher
Aladdin Paperbacks
Publication date
December 20, 2021
Series
The Runaway Pea