Frog wants to be anything but a slimy, wet frog. A cat, perhaps. Or a rabbit. An owl? But when a hungry wolf arrives--a wolf who HATES eating frogs--our hero decides that being himself isn't so bad after all. In this very silly story with a sly message, told in hilarious dialogue between a feisty young frog and his heard-it-all-before father, young readers will identify with little Frog's desire to be something different, while laughing along at his stubborn yet endearing schemes to prove himself right. 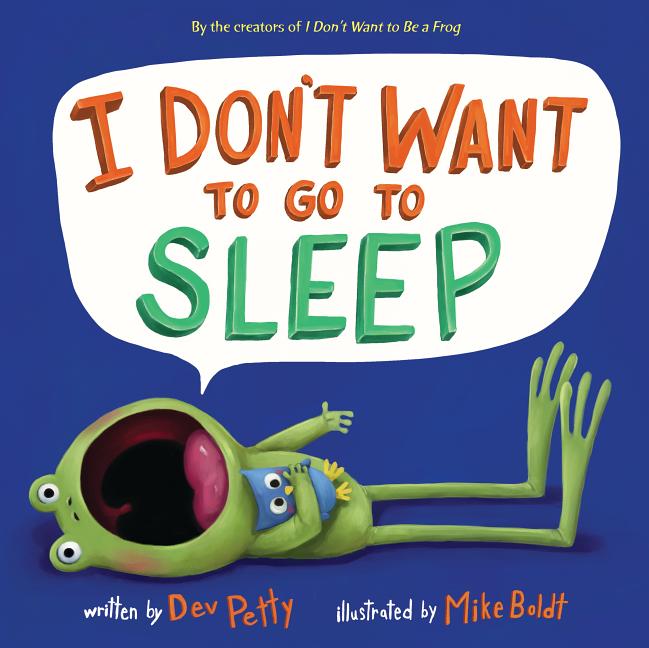 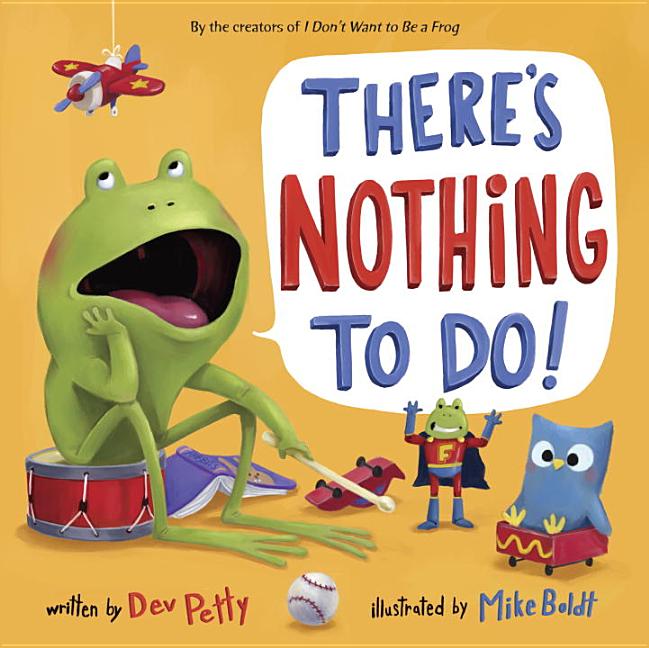 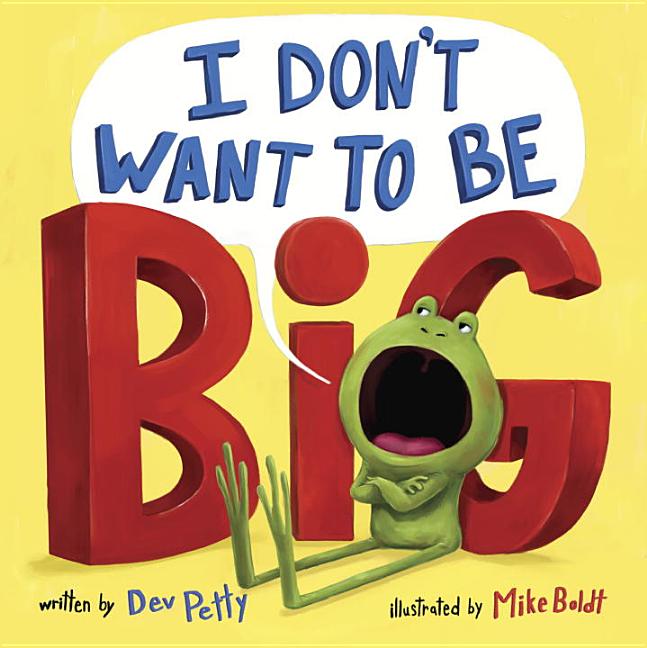 A tiny frog desperately wishes to be any other animal.

After reading a book about a cat, the young frog stretches open his mouth as wide as it will go and decidedly declares, “I want to be a CAT.” His father patiently explains, “You can’t be a CAT.…Because you’re a FROG.” But frogs are too wet and slimy. The little frog then decides to be a rabbit. After all, he can already hop. But father points out that he does not have long ears. The young amphibian is not deterred. There are many other options—a pig, perhaps? Or an owl? But his no-nonsense father explains away each one. Until a wolf, who enjoys eating many animals—except wet, slimy frogs—comes along and changes the young frog’s perspective. Debut author Petty presents a droll take on this oft-explored wish of being different. But what shines the brightest is Boldt’s expressive frog duo. Question-weary grown-ups will understand the father’s heavy-lidded eyes, and nothing embodies a childlike curiosity (and/or crazy, determined declarations) more than the tiny frog’s wide-open mouth. Colored speech bubbles distinguish the speakers’ words and tumble over each other on the page.

First-time author Petty's dialogue between a frog father and his son makes its point about accepting one's nature with a big grin. Boldt (Colors Versus Shapes) draws the two with exaggerated stringiness: the son is all rubber lips and sticky toes, his bespectacled father working as straight man. The young frog would rather be a cat, or perhaps a rabbit. "You can't be a Rabbit," says his beleaguered father. "Why not? Look, I can hop!" "Sure, but where are your long ears?" The small frog looks up, purses his lips, and feels around his head--nothing! "Besides," his father adds, "what's wrong with being a Frog?" "It's too slimy," the young frog replies. He wants to be a pig, then an owl, until a wolf appears--one who loves to eat cats, rabbits, pigs, and owls, but considers frogs "too wet and slimy and full of Bugs." Now the frog sees his existence in a delightful new light. The story might create similar gratitude in the minds of readers--or it might just make them giggle. Ages 3-7. Illustrator's agent: Jennifer Rofe, Andrea Brown Literary Agency. (Feb.)

PreS-Gr 2--Expressive, painted illustrations depict two bipedal frogs deep in a discussion. The duo is set against a solid colored background where sparse details successfully highlight the conversation, which is conveyed in speech balloons. The smaller of the frogs announces that he doesn't want to be a frog, he'd prefer to be a cat, pig, rabbit, or owl. The larger frog has a counterargument for each choice. Finally, a large wolf interjects that we would eat anything, except for frogs, the reasons being the qualities that the small frog also dislikes: too wet, slimy, and bug-eating. This amusing story ends with a laugh and a much more content frog.--Laura Hunter, Mount Laurel Library, NJ

Copyright 2014 School Library Journal, LLC Used with permission.
Dev Petty
Dev Petty's (devpetty.com) picture books include The Bear Must Go On, I Don't Want to Be a Frog, Claymates, I Don't Want to Go to Sleep, There's Nothing to Do, and I Don't Want to Be Big. Prior to becoming an author, she worked as a texture painter for visual effects in film, contributing to such movies as the Matrix Trilogy. She lives in Albany, California, with her husband, two daughters, some dogs, and other critters. Ana Aranda (anaranda.com) also illustrated The Chupacabra Ate the Candelabra (by Marc Tyler Nobleman). She was born and raised in Mexico City, and completed her undergraduate studies in illustration in France. She now lives in San Francisco, where she has painted murals in the Mission District, for the Consulate General of Mexico, and for the prestigious de Young Museum. Her biggest inspirations are her childhood memories, the vibrant colors of Mexico, and music.
Classification
Fiction
ISBN-13
9780385378666
Lexile Measure
380L
Guided Reading Level
K
Publication date
February 20, 2015
Series
I Don't Want to Be a Frog
Age Range
3 - 7 years
Missouri Building Block Picture Book Award
Nominee 2016
Texas 2x2 Reading List
Recommended 2016