Cole's wish comes true when he becomes an Assistant Knight to Sir Percival, his favorite Knight of King Arthur's Round Table. Cole learns how to ride a horse, swing a sword, cheer for Sir Percival when he goes to battle, and bandage his boo-boos when the battle is over.

Cole loves practicing every skill a Knight-in-Training must master and he is determined to be granted knighthood.

Sir Percival is a great knight in every way, except for one thing: He is terrified that an Underwear Dragon will come and destroy the kingdom.

But when the unthinkable happens, Cole is the only knight left standing (and just an assistant knight at that!) Cole must use all of his newly acquired skills to battle the fearsome dragon and avoid a catastrophe.

Luckily, an unfortunate underwear mishap changes everything and Cole triumphs in this hilarious and triumphant tale! Kids will recognize themselves in our pint-sized hero. 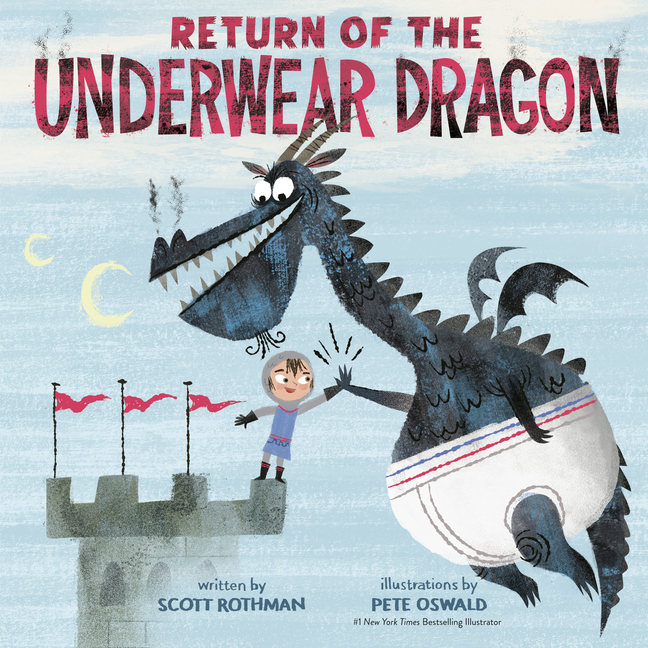 Having written a disarmingly complimentary letter that made his favorite knight cry, Cole achieves his goal of becoming assistant to Sir Percival. The sweet spoofery of debut author Rothman's text matches Oswald's (Hike) gently irreverent, funnily anachronistic vignettes: the apprentice not only learns knightly lessons, such as how to ride a horse, but also gets punched by a princess sparring partner, waves a big red foam finger during Sir Percival's battles, and bandages the knight's extensive "boo-boos" afterwards. The child embraces his responsibilities with tireless enthusiasm, and it pays off big time. When the eponymous villain, rendered in striking textures of blue, gray, and black, lays waste to the kingdom and the knights, Cole draws on his hands-on learning to joust, wrestle, and catapult the dragon until its underwear falls off, and it flies away out of sheer embarrassment. The action moves as briskly as a well-oiled cartoon episode, and ends on an appropriately amusing note: in return for his gallantry, Cole wants an assistant of his own. Ages 3-7. (Oct.)

Copyright 2020 Publishers Weekly, LLC Used with permission.
Scott Rothman
SCOTT ROTHMAN is a writer of humor pieces and screenplays, including Draft Day and Army of One, both of which he co-wrote with Rajiv Joseph. Scott is a graduate of Colby College and received an MFA in dramatic writing from New York University's Tisch School of the Arts. His humor writing has appeared in various publications, including the New Yorker, GQ, and McSweeney's. He lives in Connecticut with his wife and three children. This is his first picture book. Pete Oswald is the New York Times bestselling illustrator of The Good Egg, as well as The Bad Seed, which was an Amazon Best Children's Book of the Year and an indie favorite. He has worked as a character designer, a concept artist, and an art director on many popular films, including Madagascar 2, Cloudy with a Chance of Meatballs, and Angry Birds.
Classification
Fiction
ISBN-13
9780593119891
Lexile Measure
N/A
Guided Reading Level
N/A
Publication date
October 20, 2020
Series
Underwear Dragon