A young girl's wish to help out in her family's seaside café gets out of hand when she accidentally summons a rescue squad of fairytale princesses in this first book of a fun new illustrated chapter book series, Happily Ever After Rescue Team: Agents of H.E.A.R.T.!

After her parents move the family to a new town, all Evie wants is to help out in their new café. But nobody wants a kid--no matter how wonderful of a waitress they are--underfoot. And she does have an unfortunate habit of dropping, and spilling, and crashing! But, she also has a knack for super-fantastic dessert ideas that could win the best café contest--if only her dad and stepmom would listen! When her frustrated wish to help accidentally summons a group of fairytale princesses right out of a storybook, Evie finds herself busy fending off their well-meaning attempts to "rescue" her. Agents of HEART? More like agents of chaos!...she's keeping the puppy though. In the first book of a new series by Spy Penguins author, Sam Hay, Evie learns that new friends, a good book, and a lot of heart are all the ingredients she needs for her own happily ever after. 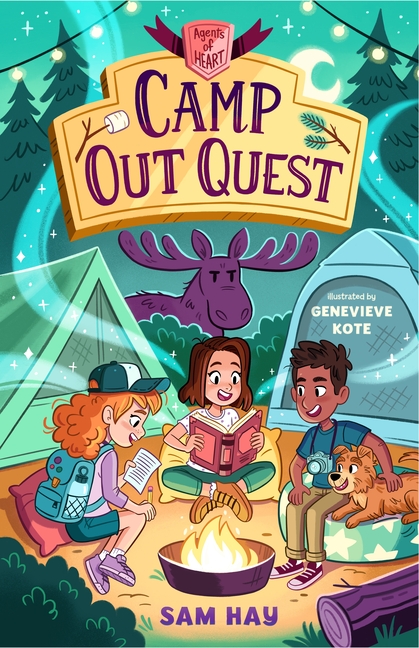 In this first installment in a new illustrated chapter book series, readers will laugh aloud at the hilarious antics of Evie and her friends as they try to fend off a team of fairy-tale agents called H.E.A.R.T. Evie, who is white, has just moved to Lime Bay with her dad and stepmother to open their family diner. It's a big day as the Golden Coffee Cup Best Cafe Contest is underway, and winning the cup would help the diner become successful. Wanting to help, Evie accidentally makes a wish on a magical storybook, bringing three fairy-tale agents to life. Agent C (Cinderella, white), Agent R (Rapunzel, white), and Agent B (Beauty, brown) mean well with their magic, but only seem to make things worse for Evie and the diner. With friends Iris, who is white with red hair, and brown-skinned Zak, Evie just might be able to fix the mixed-up situation, and possibly get a puppy along the way. Black-and-white illustrations are included throughout; there are additional activities including recipes, craft instructions, and humorous lists. Chapters are long enough to give a full narrative, but short enough for beginning chapter book readers. Jokes and mischief help move things along as the story builds through every chapter. New characters are often introduced, and the plot is more developed than those of the usual early chapter book series. VERDICT Fans of Tracey West's "Dragonmasters" and Annie Barrows's "Ivy and Bean" will enjoy this new funny fantasy series.—Anna Taylor

Sam Hay is the author of over thirty books for children including Spy Penguins, the Undead Pets series, and the Stella and the Night Sprites series. Raised in Scotland and trained as a journalist in Edinburgh, Sam became a full-time writer when her first baby was born and now lives in Wales with her husband and two children.