Welcome to 2048. Every graduate of the B.E.S.T. Program can receive a bionic enhancement as a rite of passage in this inclusive tween series. For Ace Wells, it is just the beginning of his epic augmentation journey in book one of this near-future sci-fi trilogy. Eleven-year-old Ace Wells's dream has finally come true: he is a new cadet in the B.E.S.T. (Biological Enhancement Systems Technology) Program. Until now, he's been living in the shadow of his superstar brother, Finn--but not for long. This is new Ace! He knows he can make his mark on the world with SuperSoar wings, but on day one, nothing goes as planned.

The antagonistic elevator AI Otis wants to eat his belongings, the physical feats set by his tough-nut coach are impossible, and his celebrity roommates are far from welcoming. It becomes crystal clear that Ace is not prepared to fly--in any sense of the word. As tensions build, Ace has a sinking suspicion that there's something more going on at B.E.S.T. than meets the eye. Will he ever make it to graduation and get the aug of his dreams? Join Ace and find out as he tests his strength and grit in this page-turning middle grade adventure! 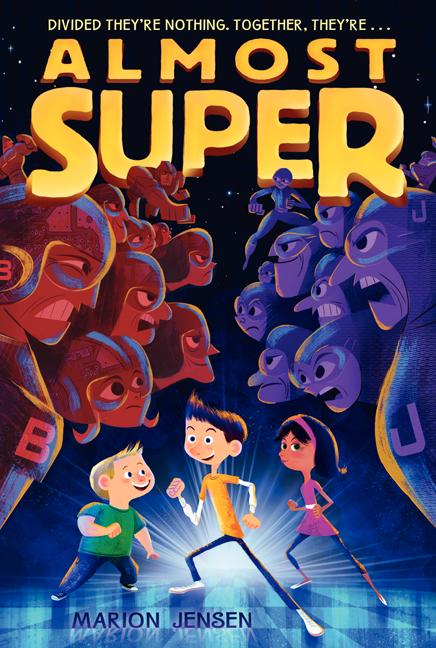 Gr 4-6--It's 2048, and Ace Wells's birthday. He's 11, which means his two moms, Mom and Mama Jay, are sending him off for two years at the Tower of Power, the skyscraper campus of the B.E.S.T. Program, Biological Enhancement Systems Technology. There, he'll train and study and be screened for a biological augmentation, or aug. The program was started decades earlier by Dr. Lance Bix, a secretive scientific pioneer who now runs it holographically from his home in Switzerland. Ace struggles to get outside the shadow of superstar older brother Finn, the first B.E.S.T. graduate to master the TurboLegs aug, which allows him to run at extreme speeds. Bedeviled by his own impetuousness and social awkwardness, Ace fears he'll never get on track for SuperSoar, the flight aug he's dreamed about for years. But when Bix's son, Ace's friend Grayson, suddenly disappears and a resistance movement surfaces that may implicate the moms of Gray and Jayla, another of Ace's suitemates, everybody's motivation shifts. Characters represent a diverse range of identities, and the portrayals are presented organically within the story. Dr. Bix and Gray, as well as Jayla, are Black. Friend Leo is in a wheelchair from leg surgery for a genetic anomaly and uses they pronouns. Teacher and staff name badges indicate preferred pronouns. The story ends with a number of plots in cliffhangers, setting up a possible sequel. VERDICT Fun, fast-paced, and also exploring a refreshingly complex emotional understory, this book is recommended for all libraries serving middle graders.--Bob Hassett, Luther Jackson M.S., Falls Church, VA

Copyright 2021 School Library Journal, LLC Used with permission.
In a high-flying trilogy opener set in 2048, McCarthy (Sword in the Stars) follows white 11-year-old Ace Wells, the newest cadet to join the Biological Enhancement Systems Technology (B.E.S.T.), a corporate-sponsored educational track that trains its students in cybernetic augmentations that grant everything from super-strength to emotional insight, and bestows one upon its graduates. He'd like to master a tricky aug to become a winged superhero, thus escaping the shadow of his older brother, "fastest kid in the world" Finn. But though exuberant Ace, who has ADHD, is an expert on the program's offerings, he chafes at its structured timeline and has trouble making friends. Partnered with three more experienced cadets—Black tech genius Jayla; white and nonbinary athlete Leo, who uses a wheelchair; and Black celebrity Grayson, whose father founded the program—Ace must win over his classmates and teachers as well as figure out which aug is right for him. Though worldbuilding sometimes feels uneven, lacking in clear stakes, McCarthy introduces an intriguing futuristic society populated by an engaging, widely inclusive cast, making for an entertaining adventure. Ages 8-12. Agent: Sarah Davies, Greenhouse Literary. (Nov.)
Copyright 2021 Publishers Weekly, LLC Used with permission.
Cory McCarthy
Cory McCarthy [they/he] is the acclaimed, bestselling author of five released children's books that have been translated into several languages. They teach at Vermont College of Fine Arts and, like many of their characters, are a member of the LGBTQ+ community. Cory lives in Montpelier, Vermont. Twitter: @MxCory, Instagram: @cory__mccarthy.
Classification
Fiction
ISBN-13
9780358265078
Lexile Measure
N/A
Guided Reading Level
N/A
Publication date
November 20, 2021
Series
B.E.S.T. World