Perfect for fans of Raina Telgemeier and All's Faire in Middle School, this sequel to the Eisner Award-nominated The Cardboard Kingdom follows the kids as they solve the mystery of a new neighborhood monster.

A mystery is afoot in the Cardboard Kingdom. Vijay, the Beast, renounces his title after being bullied by neighborhood teenagers. No one--not his big sister Shikha or his friends--can seem to draw him back out of his shell. That very night is when it starts. At first, no one believes Nate, who breaks his leg trying to pursue what he saw from his bedroom window.

But then there's another, and another. An unknown monster has been spotted roaming the Kingdom after dark. It's ghastly, it's quick, and it might even have giant tentacles. Or claws. Or wings. Okay, there might be some varied testimonies on what exactly this monster looks like.

Forget Halloween--the newly minted Monster Mashers will go to any lengths to protect the Kingdom and uncover this mystery. But how did the monster get here? What does it want? And mostly importantly, who is behind its creation? 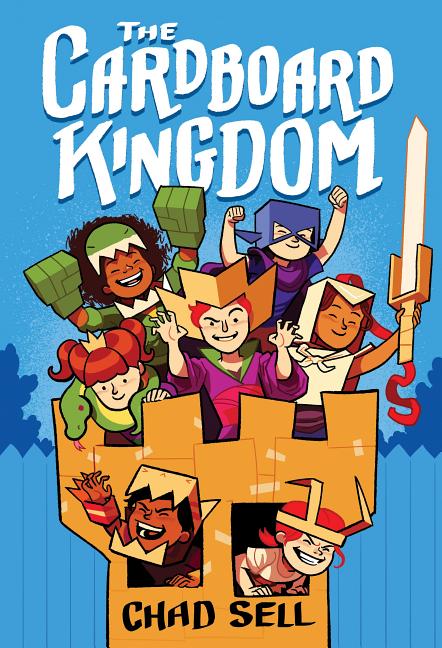 Bold, expressive artwork and varying panel shapes enhance the visual interest of the story and clearly portray the characters’ shifting moods and feelings. Fans will be thrilled to return to the Cardboard Kingdom." (Graphic fiction. 8-12)

Gr 4-7-This sequel to the highly acclaimed Cardboard Kingdom sees the characters growing up and facing new conflicts. Autumn is in the air and, with it, big plans for Halloween-which are disrupted when Nate accidentally breaks a leg investigating what appears to be a mysterious monster. The continuing search for the creature and the danger it represents play out alongside encounters with hostile local teenagers. Characters are isolated by fear, self-doubt, loneliness, hubris, depression, and secrecy, but they are ultimately united in their friendships and concern for one another. The artwork serves the children's world of make-believe, switching freely between plain reality and how they see themselves in character. Sell employs emotive faces for this diverse bunch, with lots of curved eyebrows and unique expressions across countless group shots. The monster catalyst leads to subtle but significant character developments, including the blossoming romance between Nate and Miguel. Broken up into themed chapters, each with its own cover image, the narrative hops around a neighborhood's worth of mischief. VERDICT Another engrossing adventure that rewards imagination and empathy.