Common Sense Media Review
Manny and his pal Gertie stand up for the environment--because every superhero needs a planet worth saving--in this companion to Super Manny Stands Up! from New York Times bestselling author Kelly DiPucchio and illustrator Stephanie Graegin. Every weekend, Manny and Gertie put on their capes to defeat earth-threatening dangers. WE ARE MIGHTY!
WE ARE AWESOME!
WE ARE TOUGH!
WE ARE SMART! Stampeding dinosaurs, ferocious lions, and snapping, snarling veggie monsters are no match for this Super Duo. But when Manny and Gertie come face-to-face with swarms of litter bugs in the city park, will they be able to call on their superhero smarts to stand up for their planet? 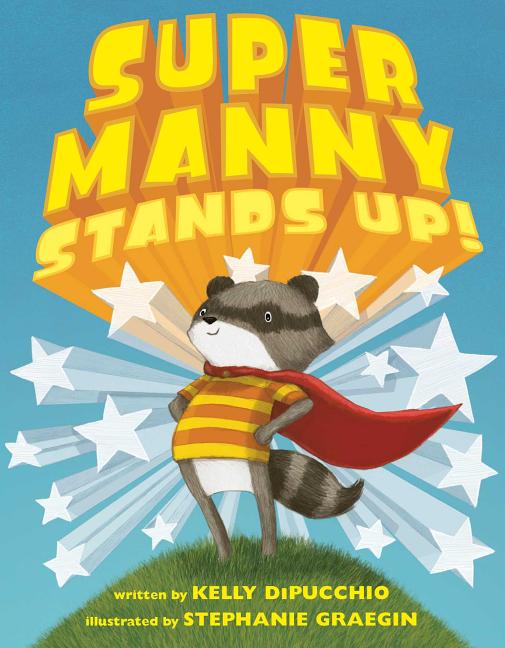 K-Gr 2--Manny and Gertie are cape-wearing superheroes saving the planet from danger every weekend. They battle imaginary adversaries all over town--dinosaurs at the museum, lions at the library, veggie monsters at the farmer's market, and a yeti right in their backyard. But their most epic battles take place in the park. While they're fighting giant turtles from Neptune, a plastic six-pack ring around a real turtle's neck spurs Manny and Gertie into action fighting their worst foes yet: litterbugs. Despite not understanding why no one else seems to care, the mighty, awesome duo get to work. Soon their hard work inspires others to be heroes and help clean up, too. By sunset, the litterbugs have been defeated (for now), and Manny and Gertie are happy "because every superhero needs a planet worth saving." DiPucchio's text captures all the fun, enthusiasm, and power in being part of a superhero team. Graegin uses the technique that was so successful in Manny Takes a Stand by combining the real and imaginary characters in her illustrations. This along with a mix of full-page spreads, white space, and dynamic text placement creates the perfect complement to the narrative. VERDICT This second Manny story is just as successful as the first. It tackles personal responsibility, littering, friendship, and the joys of imaginary play in a realistic, nonpreachy manner. An entertaining and inspiring read-aloud choice.--Catherine Callegari, Gay-Kimball Library, Troy, NH